Posted by Diana J. Limjoco on June 11, 2012
Amorphophallus-paeoniifolius (another synonym: Amorphophallus-campanulatus). Amorphophallus means 'amorpho' (without shape or misshapen) and 'phallus' is penis.  It is also called elephant foot yam or pongapong in Filipino.

The plant generally attains maturity in 6 to 7 months. Each plant produces one big root which is then cooked with coconut milk and sugar. The plant can be harvested from September until December of the same year or until January the following year.
From this article: http://socyberty.com/holidays/amorphophallus-paeoniifolius-a-famous-christmas-delicacy-in-san-roque-northern-samar-philippines

I think I will dig up the tuber of the first plant I found, since it's in the middle of a pathway, and put it in a large planter near the house.

I found another blog about this plant and I borrowed this photo of a chap holding a large tuber. The flower apparently smells quite bad.  I'd been smelling something that reminded me of an American skunk, and maybe it was this plant. By the time I came across the fist small specimen, it didn't seem to have that odor. 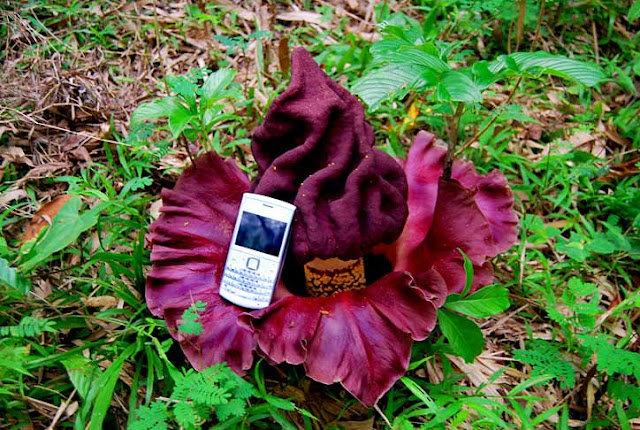