Posted by Diana J. Limjoco on December 06, 2015
The superior room was very clean and roomy. I like that the shower, commode, and sink are all separate. The breakfast buffet was ok, but the chefs don't know how to make sunny side up eggs so that the yellows still wiggle! From a resident's point of view, it is a handy spot. They left enough trees, thankfully, for it to feel foresty when you look out the windows. It is across the street from the local gift center, which carries native gifts and cheaper pearls to bring back home with for our guests who might stay there.

It's near enough downtown, one could take a trike or taxi to most of the dining areas from there if you chose not to eat at their in house restaurant. Not far from Robinson's mall either.

It's off a very busy street, so don't look for relaxation when you hit the streets walking. Indoors, it's a combination of art and industrial-ish decor. I like the tall ceilings which give it an airy feel. Very stark but easy to navigate. 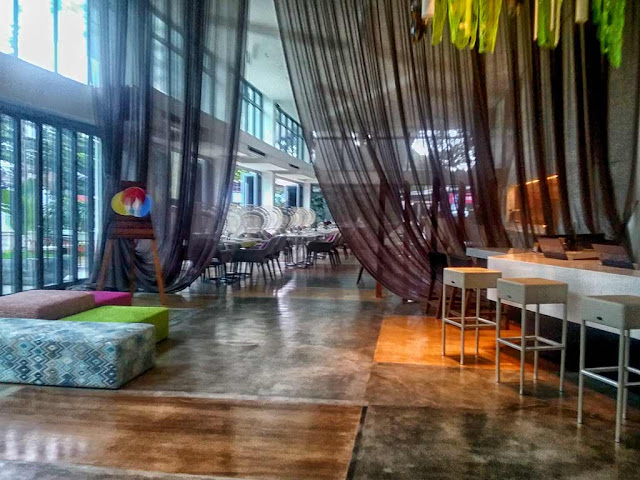 Art on the walls by local artists with themes on each floor for the rooms. Of the walls, the hotel has this to say,

"If walls could talk, what would you want it to say? The walls at Canvas speak volumes, and—quite literally—every storey has a story. Weaving that narrative into life were a team of visual artists who rendered Palawan culture, life forms and mythology onto colorful, vibrant reverbs of the island's most celebrated cultural traits. The result is a refreshing surge of life, breathed to perfectly weave into the hotel's contemporary fixtures. To wit, the walls whisper this: staying at Canvas awakens an innate instinct for adventure. Start from the ground up and allow the Canvas walls speak to you.

'As you reach the second landing, drown out in awe as you explore Under The Sea, teeming with water creatures floating in colorful concrete. Trek the steps to Land at the third floor, as you imagine yourself at a hike through earthy ground and rich soil, and bask at the summit in the top and fourth floor, aptly called Sky and Mountain, where airy explorations await. See, your adventure has already begun—and you've only just arrived at the hotel." I'm not sure it had that effect on me, but, I live here you see, and I am aware first hand of it's wonderful and rare, endangered native plants and animals, as well as it's tribes.

Getting back to the hotel, they let me shoot one of their rooms, which was the deluxe. The room was well appointed with everything you need to enjoy your stay. The room was quite modern, but the paintings on the wall softened the effect and the green tree tops made it feel cozy. I also like the different ways you could light the room.

I love the rooms, very clean and relatively spacious. I very much like the separation of the sink, commode and shower!

The food has improved quite a lot since they first opened. We ordered a wide array of dishes and there wasn't anything I did not like. I especially loved the beef soup.

I didn't get around to shooting the pool as it was raining..but will go back soon.