Posted by Diana J. Limjoco on June 18, 2015
UPDATE: This project was defeated thanks to the many voices via the petition. Many thanks.

7 Seas Corporation based in Singapore in a joint venture with Hotel Centro in Puerto Princesa, want to put in an Ocean Park in the protected bay and marine sanctuary outside of Puerto Princesa city, called Turtle bay, renamed (Kamia Bay for a resort by a local developer). If you click the link,
UPDATE JUNE-14th-2015
Seven Seas properties has taken down the artist renditions on this page. PCSD seemed not to know the extent of their development. No building should commence until Seven Seas has resubmitted the new exact plans.

All permits should be rescinded for bad faith and Turtle and Binunsalian bays should be zoned back as marine sanctuary as per an ordinance declaring Turtle and Binunsalian bays as protected bays. ORDINANCE NO. 13-92
THIS PROJECT HAS ALREADY BEEN GIVEN PERMITS BY Palawan Council for Sustainable Development (PCSD) ! WITH NO environmental impact study. It was taken only to the city and the BARANGAY! Since when are Barangay officials qualified to make such decicions of such great consequence?

Otters and other species live in this protected cove called Turtle bay.The 7 Seas corporation want to put in manta rays and captive imported dolphins!! The water is brackish from the fresh water estuaries flowing into the bay, I can't imagine the creatures will thrive in there. The corals are already a mess from cyanide poisoning; it used to be a common way to harvest fish.

The company wants to offer:
Oceanarium - (do we really want to encourage the proliferation of the illegal live fish trade by featuring the native fish taken from our very own environment.
Witness the best of marine life with an awesome display of manta rays, whale sharks, dugongs and sun fishes. (There are no more dugongs in Turtle Bay. I am in that bay many times a week in our native banca and there are no dugongs there. Where will they get the dugongs? Sun fishes? Are you kidding me? The brackish water in the bay will kill them and it's certainly not deep enough, nor food naturally food occurring for it.

WHALE SHARKS? (Now they are hallucinating. Talk about hell on earth for any of the aforementioned sea creatures forced to live in that bay.) There is NO KRILL in this bay to feed them...the water is brackish..they will all die.


Mangrove Exhibit - (No issues there) Forest mangroves are one of the most productive and complex ecosystems in the world. Known to have originated from Southeast Asia, these biological marvels are home to a diverse array of flora and fauna.

Aviary Section-Meet formidable coastal raptors called Brahminy Kites and feed them by hand as they glide near you. (Is this even legal? Or recommended? Hand feed wild birds? If you look at the photo they are CAPTIVE WILD BIRDS netted in)

Take a leisurely stroll in the Lorie Canopy Walk and let friendly lories rest on your shoulders while feeding. (Encourage wild birds to shit on the shoulders of hundreds of people a day? Are you kidding me?)

Croc Cage- Immerse in an exhilarating crocodile diving experience with some the largest saltwater reptiles in the world. An acrylic, cylindrical shaped cage will let you have an up close session with crocodiles in a 360 degree clear view. See these prehistoric creatures like no other. (Seriously? They spent years removing them from the environment here and now that new species have moved into the cove, they take a chance on escapees?)

Dolphin Cove - (It is not right capture dolphins from one area and then hold them captive in a less than ideal habitat for them.)

Swim with these lovable marine mammals in the open sea. Take a photo and have a memorable time together. (Now you're talking. Swim in the sea with wild NOT captive dolphins is fine, not something you can always guarantee, but nothing like seeing them in their own environment.)

Stingray Cove - (This bay is not big enough for all the creatures they want to feature, nor is it an ideal habitat. This bay was a Marine sanctuary and even then, it's health is already declining by immigrant fishermen who build into the mangroves, corals already destroyed by cyanide fishing in the past.)
Go beyond the waves and as you touch and take a dip with friendly stingrays in an engaging and cool attraction.

To ply the bay In our small native banca/boat, we have to be careful when leaving the cove not to get stuck on sand bars that appear at low tide.

This is the reply of Mr. Art Ventura, former Executive Director of PCSD when he was invited by one of the staff as their "former boss" to celebrate the 23rd anniversary of R.A. 7611 known as the "SEP Law", a unique law that was created supposedly for the protection of Palawan. 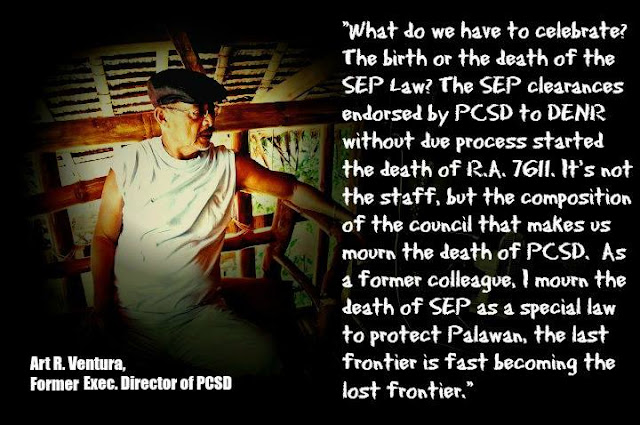 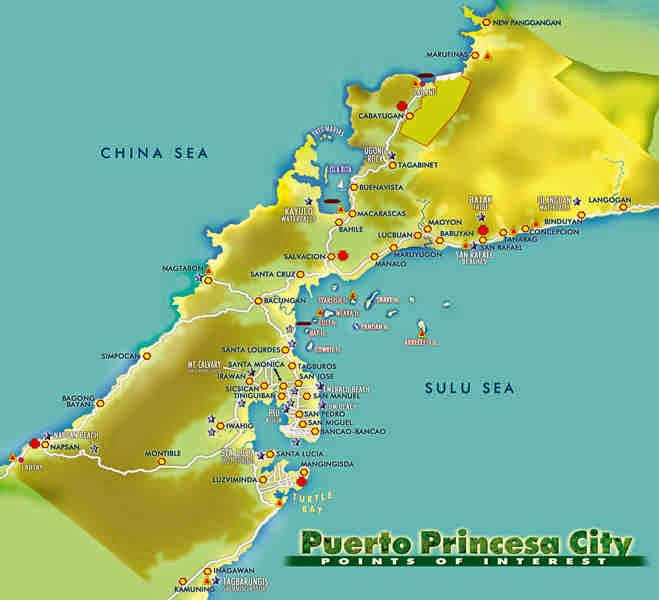