Posted by Diana J. Limjoco on December 18, 2012
We were given a 3 day old musang (common masked Asian civet cat) by a local villager. He said that it's mother was chased off by dogs in it's village and they didn't know how to feed it, so they gave it to me. We have so many animals on our property that I suppose they felt I could do it justice.  We called her Bindi, which means Little girl in Australian aboriginal language. And she's really our little girl. 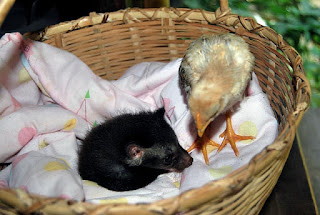 After doing extensive research on the internet I found out that giving it infants formula would work for a Palawan bear cat since there wasn't anything specific for Musangs. It seems to have worked since she is almost 2 months old now and very healthy and strong.
When we got her, she couldn't really see well or hear anything at all. It was easy to carry her around in a basket as she wouldn't leave.

Now Bindi is almost 2 months old and is a holy terror. During the day if left alone, she will sleep most of the day and can eat on her own, although she prefers if I mush up bananas, papayas or mangoes with my fingers before eating them. She will eat on her own now though, which is a relief. I used to have to wake up every 2 hours to give her milk up until she was about 31/2 weeks old.

Sunlight to Bindi is like Kryptonite is to Superman. When she tussles and plays during the day, her little bites don't hurt (well they do a little as she still has little "puppy teeth" as it were).  But once night falls, the power of darkness turns her into a raging terror. She bounces off the wall, climbs anything in sight and her nips are stronger and really hurt with those needle like teeth and claws.  Although still playing, it's like the darkness brings out her wild side...she is after all a wild creature.

When she was only a few days to weeks old, I would let her sit on my shoulder with a hand raised chicken and she wouldn't bother with it, except to smell it. Now she trys to nip it's little feet, although the chicken is much bigger now.

It turns out, this particular civet is the one which loves to eat coffee berries, and inside it's intestines, the pulp is removed leaving the coffee bean exposed. The scat is then collected, washed and roasted! It's the most expensive coffee in the world at the moment going at up to 100.00 USD per CUP! I have never tried this type of coffee, nor am I inclined to at that rate, but there are those that swear it is really different and not bitter, and some (most) can't tell the difference. We aren't raising her for this purpose and only found out all this information after rescuing her. It's just an interesting side note. You can watch a video on YouTube about civet coffee here.

In the meantime, I found out that releasing her into the wild here won't be doing her any favors as the locals actually eat them, and she won't know how to fend for herself, although even at 2 months old (not quite) she's already attacking the myna birds in the animal enclosure we built for her and them. Obviously we will have to build a partition for the birds and even the rabbit who she is already trying to wrestle with!

Will Bindi make a good pet? We have yet to find out. She is just under 2 months old, and at night she's a holy terror. I have joined a FaceBook group all about musang lovers and it shows photos of people walking them on leashes during the day, but it's all in Indonesian so I don't understand a word. One friend of mine got a musang when it was already grown and she took it everywhere on a leash, but at night it too become fierce and they couldn't deal with it and wound up giving it away.

Bindi has a very large habitat to run around in at night, so if that happens to her, she will have a large space to run around and act weird in, keeping us safe from her teeth and needle like claws. 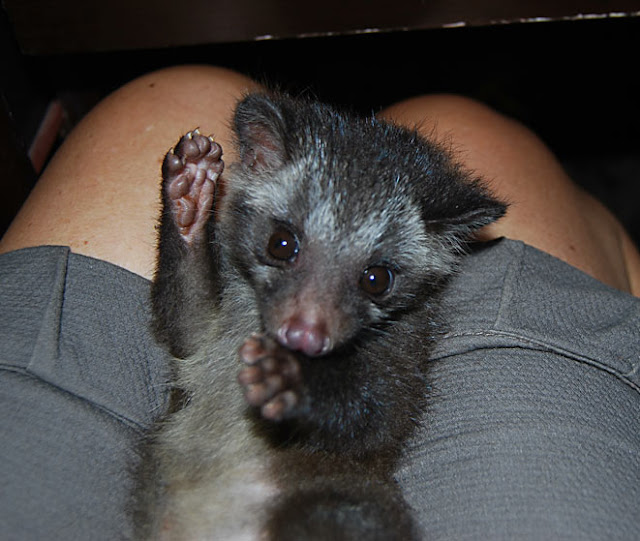 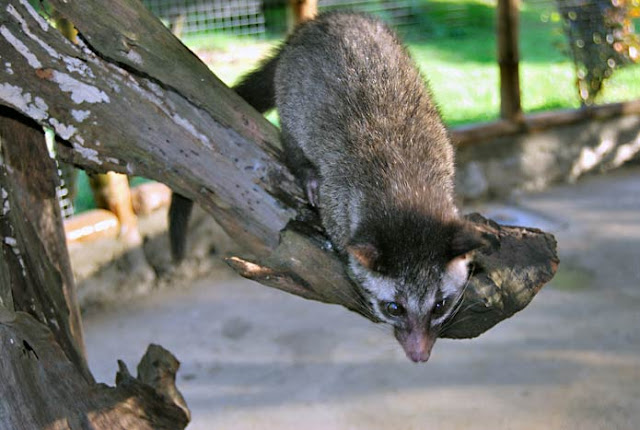 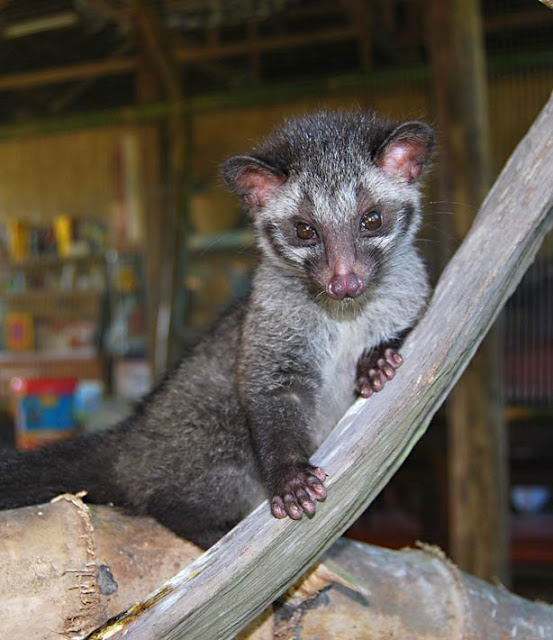 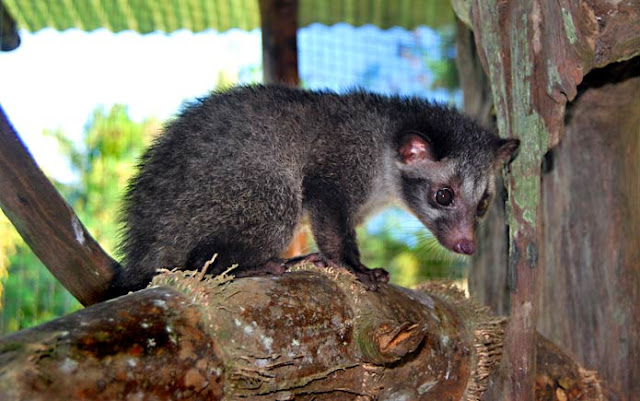